Knowing and living from your core values is a key to hearing and following your calling.

On the surface, you do a lot of things in your life, but at your core, built upon the 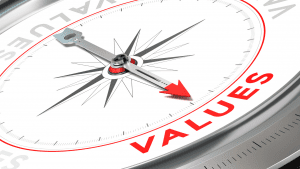 foundation of love, is a dynamic collection of values. Your core values are your trusted guides in life, so it’s important to figure out what they are. Your values give you a sense of direction when you are following a calling. They help you decide what to say yes to and what to say no to.

While values are the concepts or beliefs that are most dear to us, their meanings are not immediately obvious to us all the time. What we might think is really important to us may not actually be the thing. The more we dig into it and think about it and pray about it and learn about it and talk with others about it, the closer we can get to what our values really mean to us.

For example, one young man, Jared, identified competition as a core value. He lived this by constantly comparing himself to others and trying to outdo others in his personal and professional life. He wanted to win while others lost.

Then the unthinkable happened… he started to lose in big ways!

First, he got laid off from work. He took another job, but discovered in the first week that he didn’t have the skills to do it. He quit, which made him feel like a loser. Then, his girlfriend wouldn’t 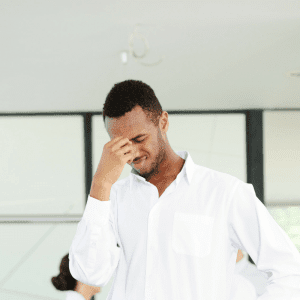 allow him to visit his daughter. Then, he started suffering panic attacks. Loss after loss left him feeling like he was losing not only his edge over others but also his core identity. He wondered, “Who am I if I can’t win at anything anymore?” He was depressed and resorted to a trusted friend… beer… lots of beer.

After confiding in a trusted human friend, Jared began to rethink his core value of competition. He had learned that being on the losing side is too painful. He decided he no longer wanted to inflict this kind of pain on others by defeating them. He began to wonder if his competitive spirit could be used to compete with himself. Maybe he could use his competitive energy to set markers for himself that he would beat.

His first competition was a battle against panic attacks. He learned about why and how they happen. He put into practice the recommendations from his counselor. He was determined to beat them, and he did.

Jared’s next competition was against his own arrogance. He didn’t like how he looked down on other people and judged them without knowing their true struggles. He began to flex his empathy muscles, and, little by little, his arrogance faded.

Jared remained as competitive as ever, but now he was competing for humanity, not against it.

Try starting your exploration of your core values with the values-clarification activity in the video below.

The following video will help you use the list above to identify and define your core values.

Take your time defining your core values. Recall how Jared thought the value of competition meant one thing, but when he thought more deeply about it, it took on an entirely different meaning for him.

Your core values, when you bring them to life in your words and actions, should bring you a sense of deep peace and the ability to connect with other people in meaningful ways. They’re not really valuable if they end up leaving you isolated and lonely. Who wants that?

We’ll leave you with this other short video that provides a clear example of what it looks like to apply your values in real life experiences. Enjoy!

We’re interested to know how your values clarification work goes for you. Feel free to share with us your thoughts or questions about your experience with this exercise.

Website visitors are free to anonymously share their thoughts and reflections with the St. Joseph staff. You are also free to request a reply from a staff member.